This Pattern Suggests Bitcoin Could Plummet to $12,000 Before Uptrend Continues

Bitcoin and the entire crypto market are showing some signs of strength on this relatively quiet morning for the markets Following a brief bout of trading below $17,000, the benchmark cryptocurrency has firmly reclaimed this price region It is now attempting to push higher as bears lose steam, which could be a sign that its recent $16,400 lows are a long-term bottom Where the market trends in the mid-term will depend entirely on Bitcoin and […]

Bitcoin and the rest of the crypto market are currently caught within a bout of consolidation following the recent market-wide decline.

This tempered trading favors bulls, as BTC and most altcoins have pushed higher over the past day.

Where the entire market trends next will depend on whether or not Bitcoin can confirm $17,000 as a long-term support level.

However, one trader is now musing a potential scenario in which BTC reels as low as $12,000 before finding enough support to begin journeying past the resistance that exists around its all-time highs.

Bitcoin is now trading up nearly $1,000 from its multi-day lows, with the recent dip to $16,400 clearly marks a knee-jerk reaction to a culmination of a few factors seen as potentially bearish.

The rejection at these highs, coupled with fears of a new wave of regulations, sent the price tumbling lower, but this fear seems to be subsiding.

Trader Indicates Move to $12,000 Could Be Imminent

One trader explained in a recent tweet that Bitcoin could be on the cusp of reeling down towards $12,000 before it can fund enough support to climb back up towards its all-time highs in the upper-$19,000 region.

“Three notes: – this is just a scenario, one of many, describing the most savage correction I could envision – probabilities on this? no idea, lots of other scenarios to consider, too early to tell – don’t bet your bank to the downside on this, seems a lot of people want this,” he said while pointing to the below chart. 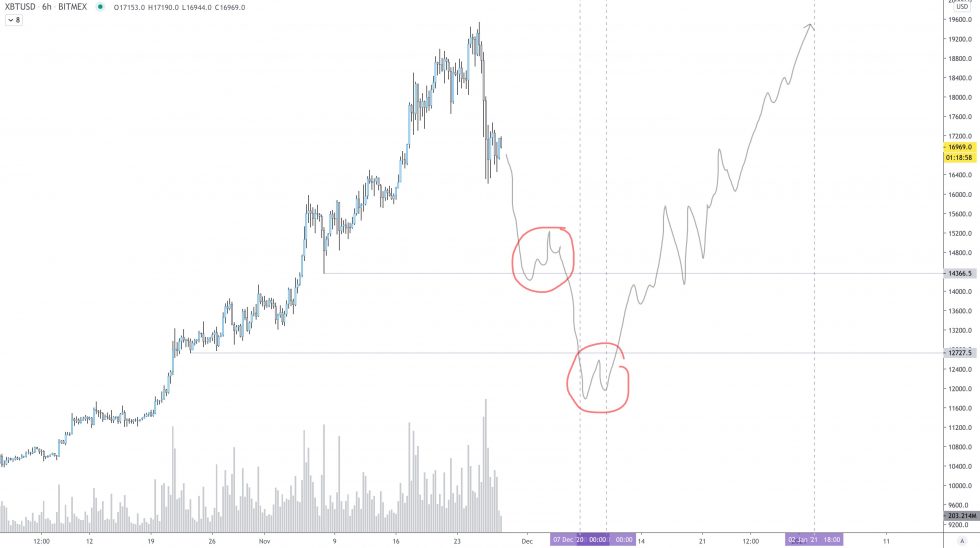 The coming few days should provide insight into where the entire market will trend next. A sustained bout of trading above $17,000 could result in Bitcoin navigating back up towards its all-time highs.

As price drops, are Bitcoin hodlers on the backfoot?

Bitcoin price to pull all stops?

Bitfinex hackers move another $30M in stolen Bitcoin from...

Markets will decide on regulations, not the government:...

Experts weigh in: Is DeFi dead or is it still the future...

Why is your Wi-Fi slow? Here are two reasons, and how to...

Your internet connection is more important than ever these days. Here's how to fix...

Report: Vicarious Visions Is Working On A Diablo II Remake

Cyberpunk 2077’s First Major Patch Is Finally Out For All...

Like the federal government, CD Projekt Red dropped a major update at 5 p.m. on...

Best smart displays for 2021: From Google to Amazon to...

Use these smart displays to connect with family or cook a meal.

The A4 excels through the right mix of comfort and sporting pretension.

This cheeky little crossover gets spruced up with more rugged styling and new equipment.