New Districts – Day to night panorama of Dubai Marina with the sun setting in between. Part of the beauty of photography lies in capturing a single special moment that will never appear the same way again. While this is what makes each photograph unique, a normal photo alone can typically only freeze a fleeting […]

Part of the beauty of photography lies in capturing a single special moment that will never appear the same way again. While this is what makes each photograph unique, a normal photo alone can typically only freeze a fleeting split second.

In trying to expand what I can record with my camera, in 2011 I shot my first timelapse video where I looked to capture the transition between different hours of the day and night, from dusk to dawn, and reversed. It’s often only when you see several hours compressed into a few seconds that humans can really grasp the change in light and colors that occur during a 24-hour period — timelapse is the perfect medium to make this possible.

But what if you could combine and capture the same in a single image? This is the question I asked myself in early 2020 when I began working on what became the Timeblend Dubai series. After some research, I found that others have gone through similar endeavors over the past years, and I thank those pioneers for the inspiration they’ve provided to me as I started to embark on this project. I’m not claiming I invented this concept, but I did intend to apply my own style to it.

The ultimate aim was to let the viewer’s eye wander through the changes in scenery as day and night flow into each other in a single continuous transition that is not normally obvious to the observer, yet somehow looks natural and makes you think twice about what you’re seeing.

The UAE and its most famous city Dubai — a city I’ve fallen in love with for over 15 years and call home today — is one of the most photogenic places on earth and it was important for me to cover a wide range of what it has to offer. As a result, the images cover the modern cityscape, such as Downtown Dubai and The Palm, but also the historic parts around Dubai Creek. At the same time, I wanted to incorporate some of the natural beauty of the country, and showcase scenes from the Hajar Mountains and the dunes of the desert. In total, I had about 40 compositions in mind, out of those I shot about 25, and in the end, 14 made the final cut.

When I started working on the project, I learned a lot about how light affects a scene and how different our environment really looks during a 24-hour cycle. This meant I had to figure out which compositions make sense for a Timeblend: which parts of a scene work better at night, and which ones better during the day, what time of the day was the best for a certain atmosphere I needed to capture, and how many different images I needed to create a smooth blend — a single daylight and night-time image each was generally not enough. On top of that, I had to work around moving objects such as lights, cars, people, clouds, and other changes that happened in between the time the photos were taken.

Sometimes that meant going back and re-shooting the same location to capture a missing piece or replace a part of the final work that wasn’t quite what I had in mind. As a result, all of the end results include at least half a dozen individual photos, taken at different times of the day and often on different days and sometimes more than 20 images were blended to arrive at what you see now. None of the images include pieces from another scene or elements that were not actually in their specific spot in at least one of the original photos, though.

While I don’t normally spend a lot of time on post-processing, in this project that was inevitable. Since it is basically impossible to keep your camera in exactly the same position when shooting a panorama, or the same composition on different days, the images had to be manually and painstakingly aligned, literally pixel by pixel, to achieve a smooth blending effect. Photoshop’s alignment feature was not able to manage this, and its warp tool became my best friend for many, many hours.

I then used digital blending with masks, gaussian blur, and brushes to achieve the transition effect by gradually hiding parts of the different layers and letting the next phase of light come through. In some of the photos, light trails and cars with motion blur as well as people were either blended in, or removed by adding a layer of the same photo taken just a few seconds earlier or later, or at different shutter speeds, to remove the distracting subjects I didn’t want.

Since I wanted to exhibit the series, I also made sure to capture them at high resolution, either using my Olympus OMD EM-1’s 80 MP mode or I hose to shoot panoramas with multiple vertical photos, resulting in a final output of 200 MP and more. This made the editing process even more painful, as some of the files easily reached 20 GB in size.

For my exhibition, I printed the cityscape shots using Titanium Lustre paper, whereas the nature shots use white matt and etching paper. The larger panoramas are almost 2 meters in size.

Below are the other photos from the series:

Two of the photos were submitted to the 2020 Epson International Panorama Awards and received Silver and Bronze accolades respectively. The 14 final works are now on display at Zabeel House The Greens in Dubai until May 16th — do get in touch if you’re in the city and want to say Hi! 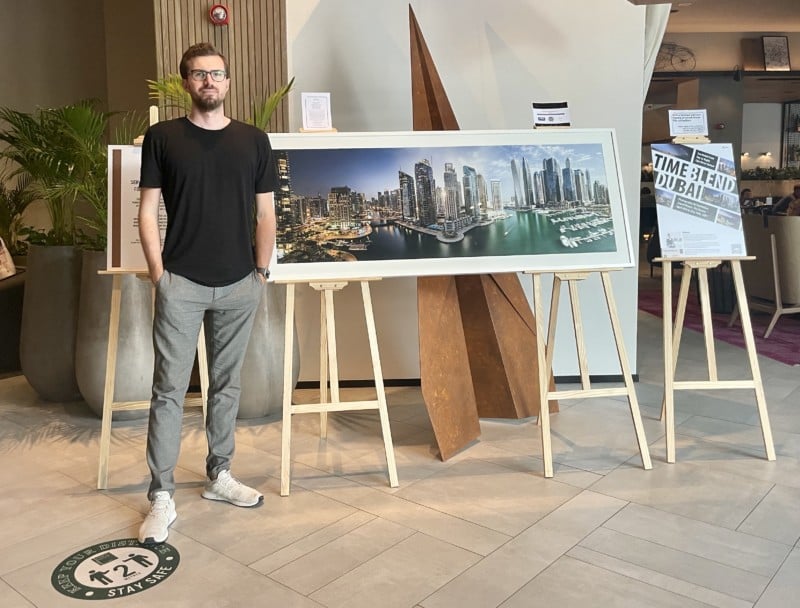 About the author: Florian Kriechbaumer is a photographer and business executive based in Dubai, UAE. He enjoys working in a wide variety of photographic domains, combining artistic and technical aspects. To see more of his work, ranging from aerial captures, cityscape, nature, timelapse and timeblend as well as deep sky and astrophotography, follow him on Instagram, Twitter, or check out his website.

Google Photos Can Now Turn Your Shots Into 3D Cinematic...

This is an Automated Film Scanner Made from Legos and a... Park perfectly in your garage with this $16 laser-assist...

The ZoneTech Parking Assist has dual lasers for a two-car garage, plus motion sensors...

The company is also selling a couple of extenders to detect water problems between,...

Qtum price rallies 160% as the project's focus on DeFi...

QTUM price hit a 3-year high above $35 as the team's focus on DeFi and staking attracts... The VPL-VW325ES costs as much as a used car, and its picture quality is a Porsche...

During Apple’s cross-examination of Steven Allison, general manager of the Epic...

The Kokga Tbilisi Awards, now in its 20th year, is the largest and most prestigious... Exclusive: Facebook's CEO talks about what the next headset could bring, how fitness...